Udaipur is a gateway to the depth of your soul. The beauty of City looks like God painted a blank canvas with a variance of colors. It is a very popular tourist destination which is located in the southern part of Rajasthan state, just near to the Gujarat border. It is surrounded by Aravali Range, which separates it from Thar Desert. Udaipur is spread across an area of 64 km2, and stands as sixth largest city in Rajasthan. It is known as the City of lakes because of its diverse lake system. Beside lakes, it is popularly known for its history, culture, scenic beauty, architectural places, regal palaces and the Rajput era places. It is the historic capital of the kingdom of Mewar in the former Rajputana Agency. It was initiated in 1553 by Maharana Udai Singh II of the Sisodia clan of Rajput.

Udaipur has received a rich cultural heritage from the bygone ages. It is famous for some of the dynamic and vibrant dance forms such as:

Tourists arrive, anytime between mid-September to late March or early April. Even in January, the coldest month, the days are bright, sunny and warm.

The city palace in Udaipur is an architectural heaven. The architectural design with a flamboyant structure took nearly 400 years to build the palace and is a blend of Mughal and Rajasthani architectural style. The palace is located in the east bank of lake Pichola and you can also see the panoramic view of  lake Pichola and the Lake Palace.  It’s construction began in 1553  by Maharana Udai Singh of the Sisodia Rajput family. The regal palace consist of plenty of rooms and pillars inside.

Inside view of City palace. This blue part of city palace was once the place which the queen used for their recreation.

Once, it was a summer palace for the members of royal family. But, it has now been converted into a heritage hotel. It is located on the jag niwas Island and this architectural structure was build on the lake Pichola by Maharana Jagat Singh in 1734. This magnificent architecture with a panoramic view of Lake Pichola gives a fairytale experience. This beautiful landscape, serene lake and beautiful view enhances the magical aura of the rippling waves and the elegant white marble is the foundation of the palace. 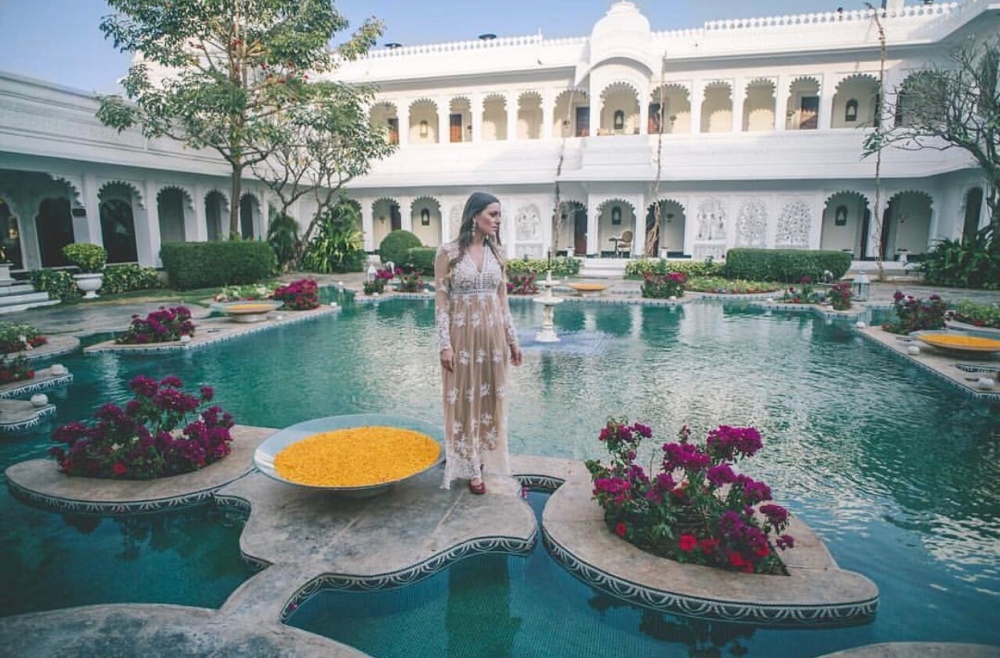 Day view of the palace. 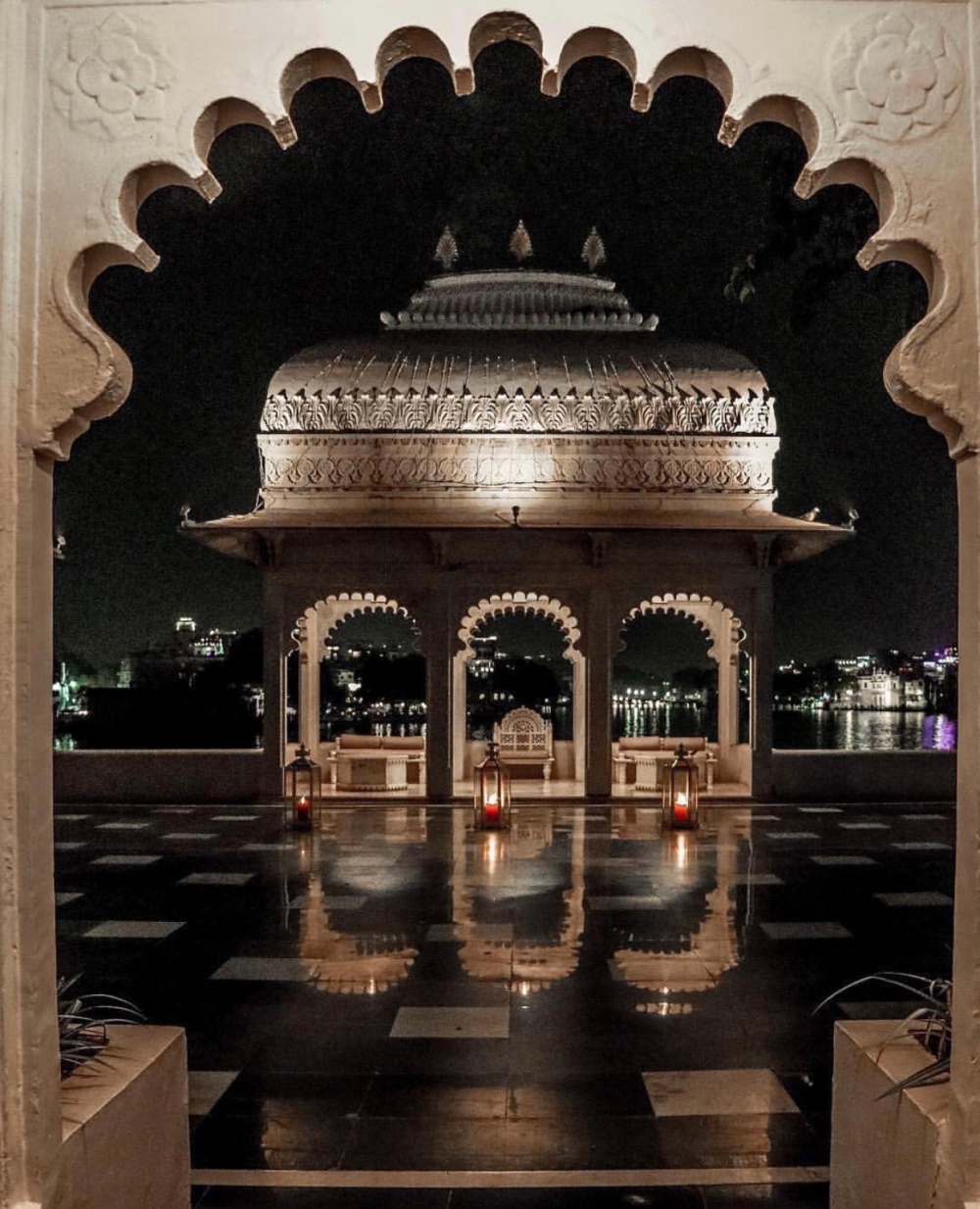 Night view of the Palace.

Jagmandir Island is a dreamland. A trip to Udaipur is incomplete without taking a ride to this beautiful place. It is also known as the Lake Garden Palace and it’s construction has been credited to the three Maharanas of Mewar. This palace was initiated by the Maharana Amar Singh in the year of 1551 and was later carried on by Maharana Karan Singh and completed by Maharana Jagat Singh.

This delightfully lit palace was build in 1884 by  Maharana Sajjan Singh and it has been build with white marble. Beyond the lake, it gives a bird eye view of the city of Udaipur. The palace is encircled by the Sajjangarh Wildlife Sanctuary. It was build on the Aravalli hills, just outside, Udaipur and the best views can be seen during the sunrise and sunset. Also, during the rainy season, dark clouds descend upon it and the scenic view remain in the eyes of beholder forever.

The vehicles in the museum are more than 70 years old but each have been beautifully restored and each one have a tale to tell. The vintage car collection is placed in the Mewar State Motor Garage.This garage was built during a time when only the Maharanas of Mewar had owned the cars.

It means the ‘Garden of maids’. It represents a green retreat of Maharana Sangram Singh in the desert land and was build in the 18th Century. It is situated on the banks of the lake Fateh Sagar and is one of the must visit place in Udaipur. Fountains, marble art and the lush lawns captures the public attention.

Udaipur Solar Observatory is known to be the best solar observing arena in the whole Asia and is one of the celebrated places to visit in Udaipur.

The calm, peaceful and picturesque spots of this city makes you feel warm. It is a small pond surrounded by a rock garden and is situated within the city.

This is a very exclusive and exquisite crystal collection and was built by Maharana Sajjan Singh in 1877. It has been hailed as the single largest private collection of crystal across the world.

Bagore Ki Haveli-It is a beautiful place on the waterfront of lake and was build in 18th century.

Haldighati– This place deserves a visit for the majestic history and it’s diverse culture. It is a mountain pass in the Aravali range. Distance from the City: 40kms

Kumbhalgarh Fort:It is 64 km away from the city and was build in 15th Century by Rana kumbha. It is the second important architectural structure after the Chittorgarh fort.

Chittorgarh Fort:It is situated 112 km away from the city and is a true embodiment of the pride and the glory of the Rajput culture making it one of the places to visit in Udaipure.

Maharana Pratap Memorial:It was build by Maharana Bhagawat Singh Mewar in memory of the Maharana Pratap and the statue over there tells a story of courage and  deep love between humans and animals.

Kumbhalgarh Wildlife Sanctuary: It is situated 65 km away from the main city and it falls in the district of Rajasamand in Rajasthan. This sanctuary was built to provide shelter to the endangered animals like jackal, wild cat, sloth bear, wolf, leopard etc.

Sajjangarh Wildlife Sanctuary:Very rare species of wild animals can be spotted here such as sambars, wild boars, chitals, hyenas, jackals, panthers, hares and blue bulls. It will take almost 30 minutes to reach here from the city.

It is one of the great works of architecture and was build in 1651 by Maharana Jagat Singh. It has 50 carved pillars, beautifully decorated ceilings, gorgeously painted walls, and spacious halls and corridors. It is open practically all day- from 5.30 am to 10pm. 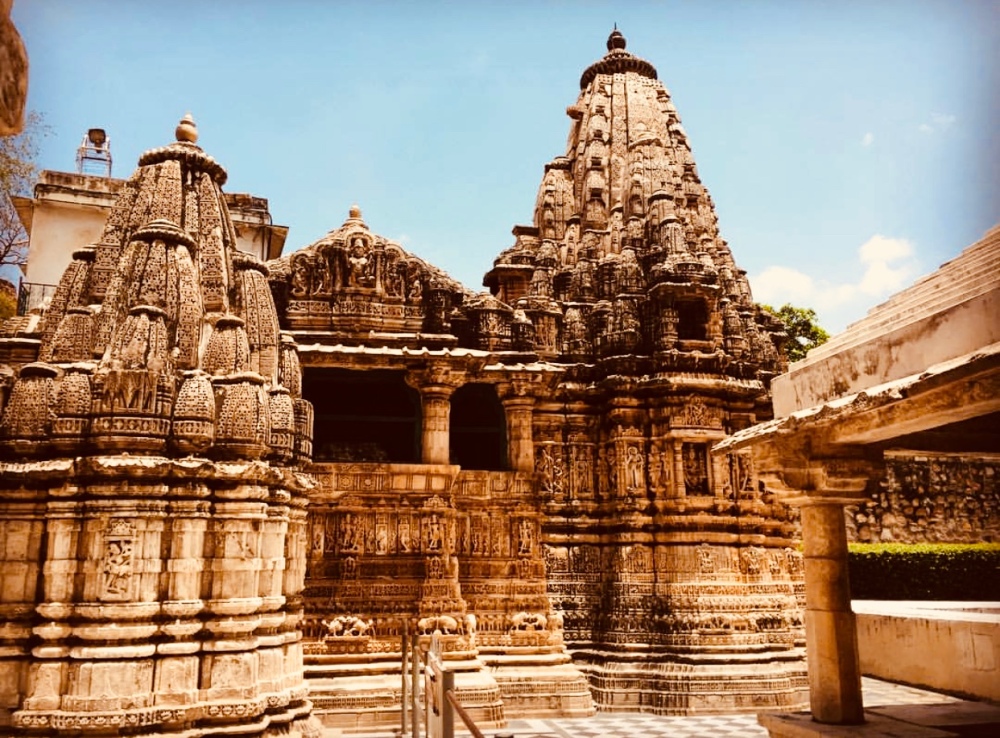 It is a complex of 108 ancient hindu temples over 1200 years old. Appreciation for the marvellous stone work will be the overwhelming sentiment you experience when you walk around the 108 temples.

It was build in the 15th century and is one of the five holy places for Jain community. This revered place of worship has 29 halls and 1444 pillars. All the temples inside Ranakpur four faced structure are with intricate engravings.

It was built in 1678 by Maharana Jai Singh and is the second artificial lake of Udaipur after Jaisamand lake. It is famous for boating, food market, camel and horse rides. 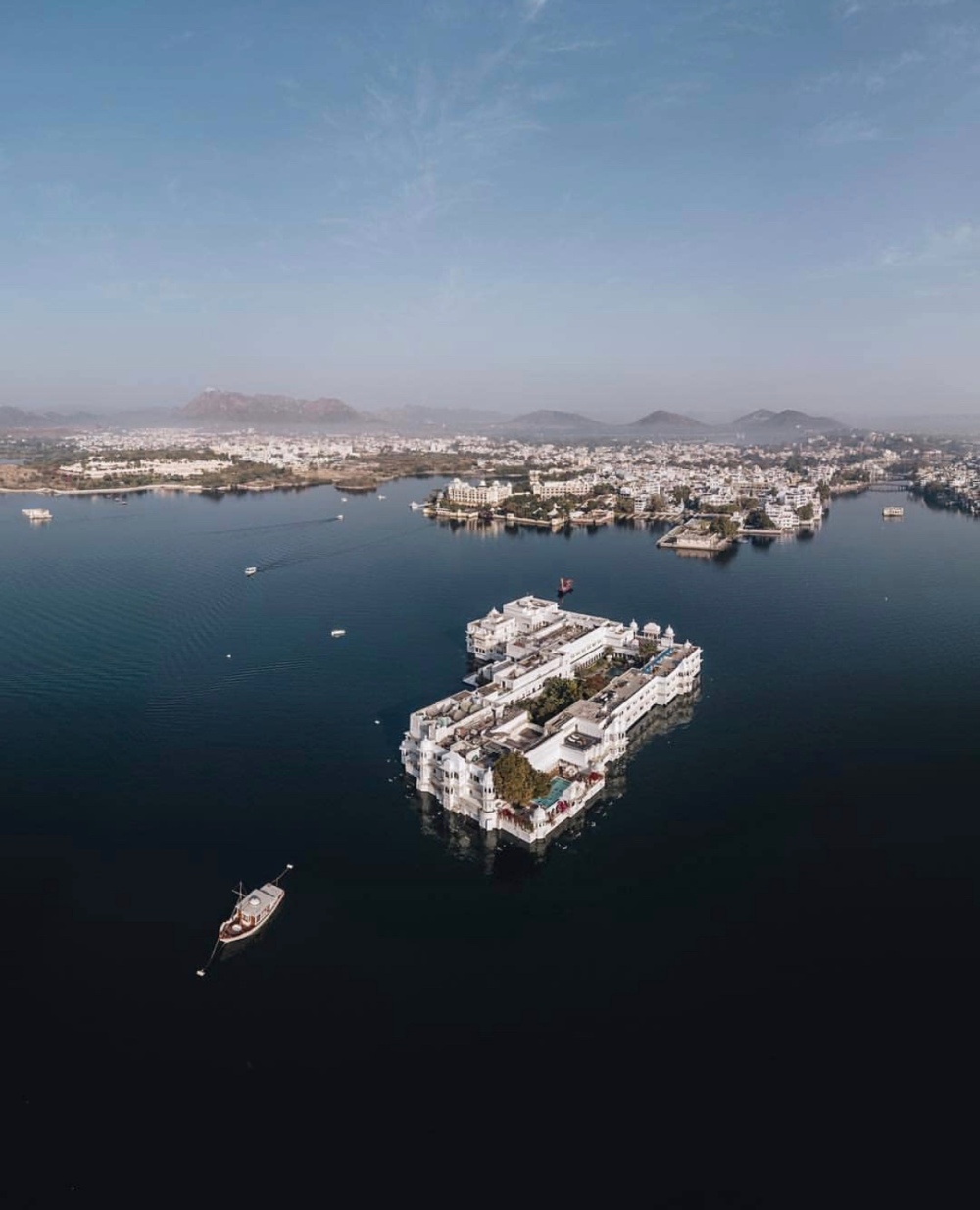 It is one of the oldest and largest lake in Udaipur.The Taj Lake Palace resting in the middle of the waters of the Lake Pichola. 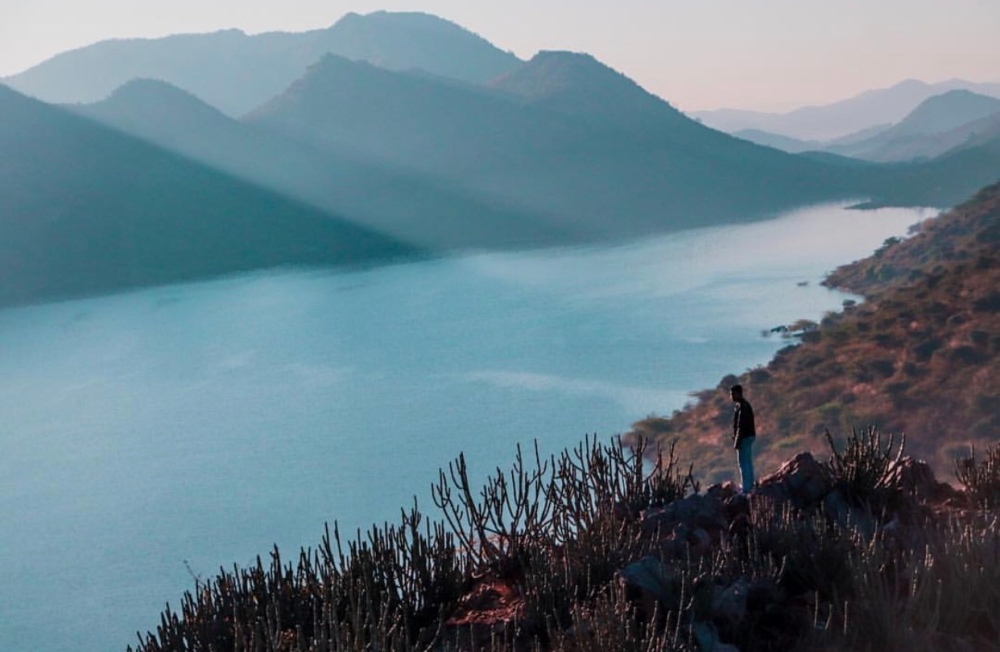 It is situated near the Village Badi, the lake is also called by the name Jiyan Sagar named after Jana Devi, the mother of Maharana Raj Singh who built the lake.

Jaisamand means ‘Ocean of Victory’. It is situated at a distance of approximately 51 km from the city of Udaipur and is also called as Dhebar Lake. It was built by Maharana Jai Singh in the year 1685.

Udai sagar – It is located at a distance of about 13 km in the east of Udaipur. The construction of this lake was begin in 1559 by Maharana Udai Singh and Completed in 1565.

Swaroop Sagar- It is located near Chand Pol adjoining Rangsagar (which is a branch of Pichola Lake) and is connected with Lake Pichola and Lake Fateh Sagar.

Dhut Talai-The serene, calm and picturesque spot of the city.

It is a two-level, open- air fine-dining Indian Restaurant. The ambience of the open-air restaurant glitters under a clear sky full of stars. Added to it, the evening glow of candles in various hues adds a resplendent touch of a bygone era.

The specialties are divided into two categories, delicacies cooked over coal and the Rajasthani specials. It is also suitable for candlelight dinner in Udaipur as the ambiance is subtle and romantic.

Upre has the perfect combination of great hospitality, photogenic location and mouth watering dishes. The warm hospitality of the place, never fails to please anyone.

It is located on the banks of Pichola river with a spectacular view of the Jagdish Temple, Lake Palace, Jag Mandir and many more architectural marvels of Udaipur. It serves excellent multi-cuisine delicacies that make the mouth water and tingle the taste buds. 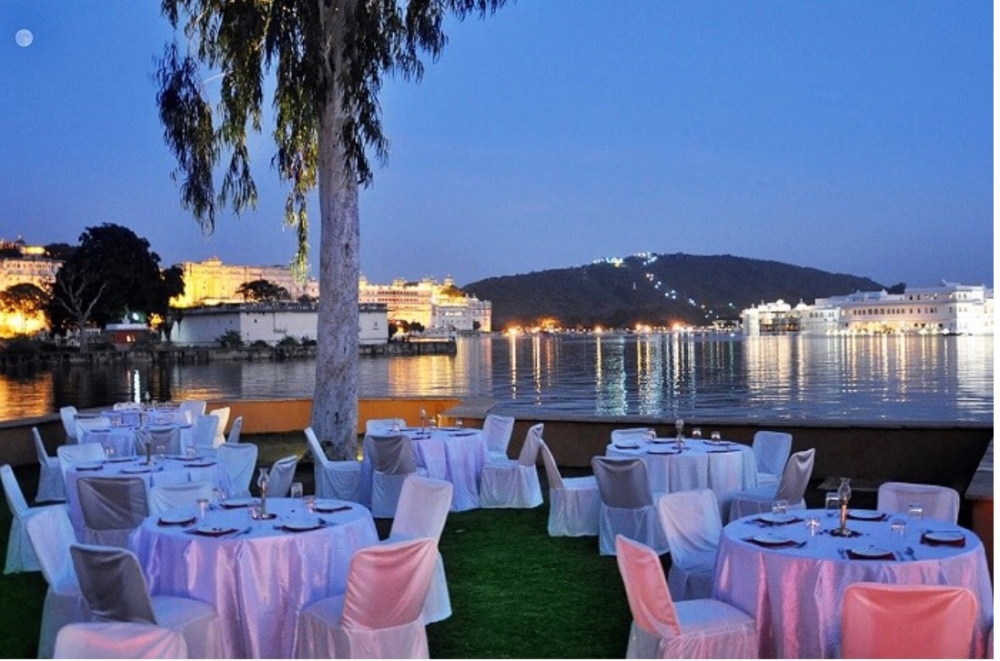 Located near the lake with a panoramic view, Raas Leela specialises in North Indian, Chinese, Continental and Rajasthani delicacies. Apart from the delectable local food of Rajasthan, it has a vibrant aura and the restaurant is quite economical too.

Udaipur is home to many luxury hotels. But, I highly recommend the ‘Lake Pichola Hotel’. Founded by the legendary Maharana Udai Singh in 1559 A.D. on the banks of Lake Pichola. This is probably the most beautiful hotel and the rooms are comfortable. The view of the lake and the city from the room’s windows are absolutely beautiful.

Shilpagram is an art and craft village, located 3km west of the city of udaipur. Shilpgram is an ethnographic museum that depicts the lifestyles of the folk and tribal people of the region. Udaipur, the city of lakes is known for handicrafts such as painting, marble articles, architectural designs and terra-cotta. The Shilpagram is a pavement where regional handicrafts and hand looms are prepared.

Famous for: Shilpgram Mela is famous for its handicrafts and artwork. As well as folk music also.

Closed on: This crafts village remains closed on Sundays

How to reach: The Shilpgram is situated at a distance of 3 kms west from Udaipur, near the Havala village.

It is a place where you can find a diverse varity of handicrafts, illustrious paintings and folk arts of Rajasthan.

Closed on: The market remains closed on Sundays

How to reach: It is located adjacent to the City Palace. 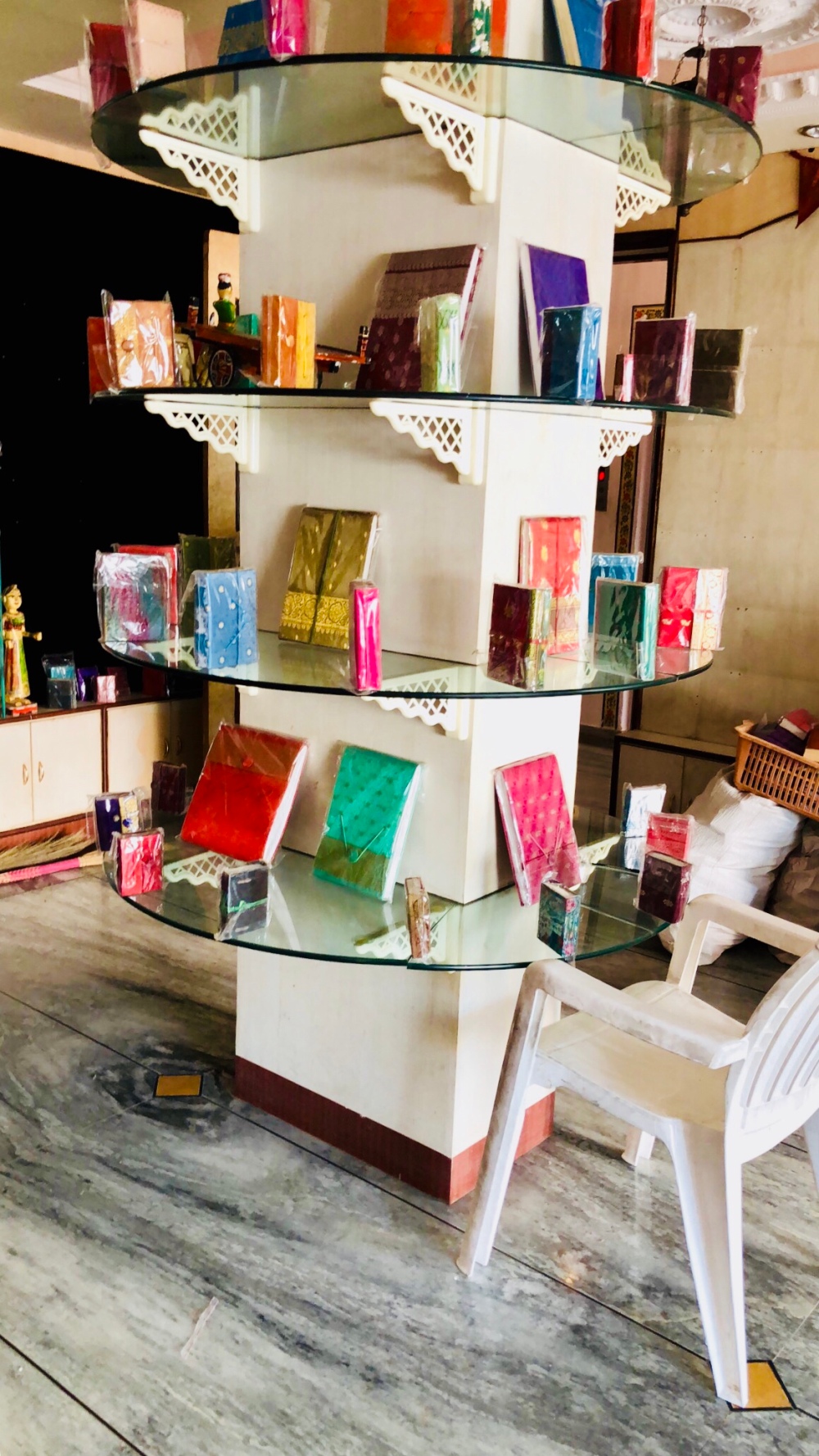 It is a very busy market, located very close to city palace. This market is famous for its journals and diaries made from handmade paper.

It offers plethora of small shops, showrooms and, it is famous for handmade jutties ( footwear), Batik and Bandhani print sarees and textiles. It is located within 1 km of the city palace.

If you’re looking for a diverse variety of handicrafts and handmade jutties. So, you must visit the City palace street as their is innumerable shops and wide variety is available.